Yesterday was Friday the 13th, and I took the opportunity to maximise my school holidays by sitting down with a few beers to watch the entirety of the Friday the 13th slasher series. Well, the first eight films at least: I left out Jason Goes to Hell, Jason X, Freddy vs Jason and the execrable 2009 remake. I’ve always had a soft spot for these movies: none is exactly good, but there’s just something about Camp Crystal Lake; the beautiful surrounds, the beautiful teenagers, the beautiful gouts of blood as Jason’s machete arcs through flesh. 200 words per film, coming up…

If you’re familiar with horror franchises, you’d be aware that series generally begin with the most straightforward entry. The first film establishes the villains, the setting, the stakes and, if you’re lucky, the victims, before subsequent filmmakers go batshit with the sequels. So maybe it’s not that surprising that the first Friday the 13th is, well, a little boring compared to the films that followed it.

By now everyone would have heard of the twist that concludes this film, with the murderer revealed as Mrs Pamela Voorhees, she of the fondness for ugly sweaters and sharp arrows. Hell, it was even spoiled in the famous introduction to Scream. The reveal is arguably the best part of the film (arguable because the Camp Crystal Lake setting, gorgeous yet ominous, never looks as good as it did here). Betsy Palmer is fantastic as Mrs Voorhees, sympathetic one second and psychotic the next.

Unfortunately the twist means the film is kind of a bore to sit through. Since we never see the killer until the climax, every single kill is staged basically the same way: unimaginatively. Still, at least there’s Kevin Bacon, and that wonderful stinger of Jason surging out of the water.

“The Star Trek curse” states that the even numbered Star Trek films are the superior films, but it could easily be called “the Friday the 13th curse” since it’s equally applicable. 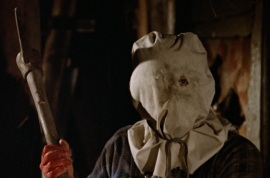 Where the first film is forgettable – to the point where it’s hard to imagine how it inspired such a successful franchise – its sequel is a genuinely good slasher. Sure, most of the actors are awful (the sleazy slingshot guy and the skinny dipper he sexually harasses are particularly dire), but this is where we meet Jason proper, and he’s at his peak. He’s not some indestructible demigod yet, but rather a lumbering roughneck. While the iconic hockey mask won’t make an appearance ‘til the next sequel, let’s be honest: a white sack with one unblinking eye is way scarier than a paltry piece of sports equipment.

The highlight of the film is undeniably the extended climax. Pretty much every Friday the 13th film ends with a prolonged cat-and-mouse chase involving Jason and the Final Girl (and sometimes Boy), but none of them have the naturalistic nuance of Part 2. It’s clever – Ginny memorably impersonates Mrs Voorhees – and surprisingly well-edited and storyboarded. The requisite “shock” ending is less successful, though.

The gimmick to get teenagers to keep flocking to the Jason grindhouse for Part III is 3D. Yes, long before James Cameron brought the technology back, folks were popping on a stylish pair of red-and-blue glasses to watch popcorn fly right at the screen. (Literally, there is a shot in this film where popcorn kernels fly at the camera)

Part III is probably best remembered in this series for being the film to introduce Jason’s famous hockey mask and, yep, it sure does that, when it pilfers it from resident nerd Shelly (Larry Zerner) – yes, it turns out Jason is a master of murder and petty theft. But aside from introducing a modern horror icon in the form we all know and love him, there’s not much to recommend Part III.

The best bet is to watch the film with a group of friends and a lot of alcohol, because at least then you can find some easy laughs at the three-dimensional fol-de-rol. The Final Girl is embarrassingly boring (apparently she was attacked by Jason in the past and zzzz…), and the attempts to recapture the magic of the first movie’s concluding surprise with a skeletal Mrs Voorhees are unsuccessful.

Depending on your perspective, that The Final Chapter subtitle is either optimistic or pessimistic. Whatever your perspective, it shouldn’t be hard to have fun with The Final Chapter, which is the first Friday the 13th film to have a sense of humour about itself. It features the copious bodies (fourteen), copious boobs (it’s the only Friday the 13th film to feature a group skinny-dipping scene), and both Corey Feldman and Crispin Glover (whose jerky dancing is easily – easily! – the highlight of the series).

The Final Chapter begins the series’ gradual trend away from Camp Crystal Lake; most of these films end in a hospital, but this one starts in one, with an undead Jason slaughtering a hapless mortician and his ladyfriend. Jason shambles out of the hospital towards some holiday homes that don’t seem to have anything to do with Camp Crystal Lake, but there’s a lake involved so it’s probably fine.

This film features some attempts at mythology building – there’s a stoic guy aiming to avenge his sister’s death, and Corey Feldman goes crazy or something – but it’s hard to take it all seriously. And really, four films into the series, why on earth would you take this seriously?

A New Beginning is pretty widely regarded as one of the worst Friday the 13th films, basically because it doesn’t feature Jason at all (the killer is actually a paramedic. Yep.). But it’s bad for so many other reasons! Firstly, it completely fucks with the timeline, jumping about a decade forward in time (it’s set in the mid-‘90s despite being made in the ‘80s).

More importantly, it tries to justify its existence with a huge bodycount (the first film to get over twenty deaths), except forgets to flesh out a single character, despite ample opportunities: the film is set in a home for disturbed youngsters. Tommy –played by Corey Feldman in the last film, now all grown-up – doesn’t get any characterisation because the film wants us to think that maybe he’s the killer.

Thankfully, there are some unintentional laughs (and lots of nudity – even the Final Girl ends up in a white shirt in the rain). The “best” scene is the most inexplicable; early in the film, a rotund gentleman with a fondness for chocolate bars bothers some guy chopping wood. So, naturally, the woodchopper hacks the chocolate-fan to pieces with his axe. It’s unexpected enough to actually be funny.

My favourite film in the series has to be The Final Chapter, but Jason Lives comes close. The fifth sequel takes a different approach to its neighbours; recognising that Jason Voorhees is becoming less frightening, it aims for broad satire and clever callbacks over scares. Tommy’s back, now played by Thom Mathews (Return of the Living Dead), and Mathews’ overacting is perfect for a post-modern movie that plays with the tropes of the genre long before Scream. 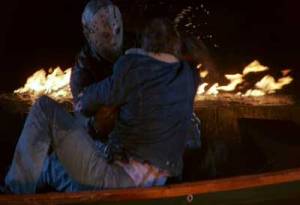 Jason Lives isn’t subtle about its satirical intentions, starting by reanimating Jason from the grave with a lightning bolt (after he was canonically cremated in the previous film). Crystal Lake is now called Forest Green because I guess five years of brutal murders doesn’t help win “Tidiest Town,” and Tommy ends up facing off with Jason in a camping ground (with actual campers!).

There’s more to the film than comedy, though; it’s the best looking film in the series, with bold, colourful camerawork, and the climax is really well-written, providing appropriate tension and surprises while respecting the fact that Jason is basically an unkillable zombie at this point. If I were to pick a point for the series to end, this’d be it.

Part VI tried to elevate the proceedings with comedy. Part VII instead slides towards fantasy, introducing a Carrie-esque Final Girl whose psychic powers allow her to see Jason’s kills and use psychokinesis against him. There’s probably something interesting here – the series has gradually introduced more and more supernatural aspects to Jason, so why not give his victims the same advantage? Level the playing field, so to speak?

Unfortunately The New Blood ends up more like warmed-up leftovers, full of indistinguishable teenagers getting slaughtered in the woods. The kills are inventive – the infamous sleeping bag murder occurs here – but nothing else about the film is. We do eventually get to a showdown between Jason and Psychic-Final-Girl (no, I didn’t learn her name), which is sadly mediocre. There’s lots of moments where Jason stands around looking tough, she encases him in tree branches or drops and building on him and then moves on without actually checking to see if he’s actually defeated.

The really cherry on top, the piece de resistance of Part VII comes in the final moments,where Psychic-Final-Girl brings her dead father, who’d drowned in Crystal Lake, back to life to drag Jason back into the lake. Sure. Why not.

About all Part VIII has going for it is the title. Jason Takes Manhattan! It sounds pretty exciting, right? I mean, removing Jason from Crystal Lake might be in contradiction to the environment subtext at the heart of the films, but that doesn’t mean it couldn’t be fun.

Unfortunately Jason Takes Manhattan falls victim to a clearly insufficient budget and the worst script of the series. Much like Lost World, it takes more than half the film before Jason is unleashed onto New York. At least the Jurassic Park sequel had the self-respect to have some fun in the Big Apple; Part VIII is clichéd (New York is a wretched hive of scum and villainy, where our heroes are robbed, drugged and raped within minutes of arriving) and incoherent. The Final Girl keeps seeing visions of young Jason that are never explained, and when they arrive in New York, Jason chases the same small group of people for no reason.

There’s really nothing to recommend the last film. The look of the film has none of the mid-‘80s charm of the earlier films, and there’s not even the iconic Crystal Lake setting. I kinda wish I’d stopped at number six.

6 thoughts on “The Friday the 13th Series”