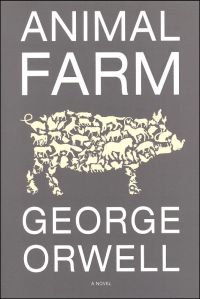 Epiphanies about art are few and far between. You remember them. So it goes with me and Grade 7 English, when we analysed George Orwell’s Animal Farm. As my teacher unpacked the meaning and symbolism of the novel, how it was an allegory for the Russian Revolution and the rise of Communism, how the exile of Snowball mirrored Trotsky’s exile and erasure, how the sturdy Boxer represented the gullible but loyal working-class … it was a revelation. My eyes were opened to the possibilities of art as something more substantial than entertainment, something greater than Teenage Mutant Ninja Turtles.

It was a seismic shift in my approach to art in many forms, but it simultaneously sabotaged my future appreciation as art, at least temporarily. You see, to young Dave, analysing Animal Farm led me to the flawed idea that art could be “solved.” Instead of recognising Orwell’s classic as a rich combination of children’s tale, fable, historical allegory, cautionary tale and a moving piece of fiction, I reduced it to “that Russian Revolution book.” For years afterwards, my approach to challenging, complex art was, more often than not, to look for a key, a solution. An answer. A reductionist approach that’s only rewarding when applied to simplistic fiction.

Great art can’t be solved. Citizen Kane isn’t about Rosebud. It doesn’t matter if Once Upon a Time in America is an opium-induced dream or not. Whether or not you believe Clementine and Joel have been together before (and will again) isn’t the point of Eternal Sunshine of the Spotless Mind.

Oddly, it was a film that was marketed as having an answer that revealed to me the ridiculousness of this approach. David Lynch’s Mulholland Dr. is a famously “difficult” film, and many friends advised me that it “made no fucking sense.” The DVD packaging comes – at the urging of concerned studio executives – with a list of “clues” to aid a viewer in their understanding of the film. These clues present the film as a puzzle: put the right pieces together in the right way and the solution will reveal itself.

I spent some time trying to solve Mulholland Dr. I watched the film again and again, poring precisely over the (pretty unhelpful, frankly) list of clues marked on the inside cover of the DVD case. I found my way to forums where people even nerdier than I broke the film down, piece by piece, espousing intricate theories as to the meaning of that guy with the vacuum cleaner, or what this continuity “error” might represent. There’s a big market for this kind of obsessive analysis: just take a look at Room 237, a documentary that recounts intense, often insane theories on Kubrick’s horror masterpiece, The Shining.

It’s all kind of bullshit, though. Yes, close analysis of Mulholland Dr. and The Shining reaps rewards, and reveals the depth of emotion and intelligence that went into each film (the same can’t be said of, say, Grown Ups 2). But The Shining isn’t a heavily-veiled confession from Kubrick that he faked the moon landings. Equally, it isn’t “just” a haunted hotel horror story, nor is Mulholland Dr. “just” the dream of a desperate women who’s done despicable things. Lynch’s film features a mysterious blue box that can only be opened by an equally mysterious blue key; the film’s mysteries, however, are not so easily unlocked.

All this serves as a longwinded way of justifying my ambivalent reaction to Paul Thomas Anderson’s The Master when I first saw it. The film courted controversy as a “Scientology film,” with Philip Seymour Hoffman’s Lancaster Dodd a thinly-disguised analogy for L. Ron Hubbard, the science-fiction writer who founded Scientology. This is partly to blame for my dull disappointment viewing The Master last year; while I could appreciate the crisp, gorgeous cinematography and towering performances from the film’s three leads (Hoffman, Joaquim Phoenix and Amy Adams, all outstanding), I went in expecting … I’m not sure exactly what I was expecting. A cult origin story? Batman Begins, with Scientology instead of superheroes? Whatever it was that I wanted, the film did not deliver, and my vague dissatisfaction is immortalised in this (terrible) review.

Revisiting the film was illuminating. I still rank Anderson’s preceding film, the magnificent There Will Be Blood, as the better film. The grandeur of the oilfield, the flaming gouts of oil and, of course, Daniel Day Lewis’s domineering performance as modern film icon Daniel Plainview have left an indelible impact that The Master’s quieter approach could not match. But The Master is a truly great film. It is, in part, an examination of the creation of a cult, but despite what the marketing had led me to believe, it is a very small part of the film’s fabric. Like Mulholland Dr., like The Shining, The Master is not a film to be solved. Like those films, it’s complex, difficult and rewards deep analysis.

So, let’s analyse, shall we? I don’t think that question “what is The Master really about?” has a single answer, but there are some substantial themes running beneath the surface of this film, all worth examining. (It’s actually quite fitting that there’s no big answer here, given that Dodd’s philosophy seems unable to provide any real answers either)

The core of the film is the relationship between Lancaster Dodd and Freddie, an adoptive benevolent father to a troubled surrogate son. From Dodd’s perspective, Freddie provides an opportunity both for redemption and to prove the effectiveness of the techniques he advocates; Freddie is the classic black sheep, entrenched in alcoholism and primal sexual urges (primal being the operative word; he’s described as a “silly animal”). Dodd has a doubting son (Jesse Plemons), a doting son-in-law (Rami Malek) and another child on the way, but he seems to feel a deeper connection with Freddie.

Freddie’s history with his own father is unexplained but clearly complicated (all we know about him that he’s dead due to drink). Early in the film, he tells an old man that he “looks just like his father,” but by the next scene his father analogue lies poisoned – perhaps fatally – by Freddie’s hooch. The short film Back Beyond which accompanies the Blu-Ray hints at a darkness in Freddie’s past (“Have you ever had harm come to you?” “Sure.”), before he’s seen to burrow into the sand beneath the oft-seen sandgirl, as though he’s re-entering the womb.

Freddie’s arc throughout the film mirrors the journey every child takes from unquestioned faith in their parents to the realisation that their parents are flawed. Human. Freddie constructs in his own mind a version of Lancaster Dodd that is benevolent, omniscient. Perfect. He reacts violently to any suggestion that Dodd is in any flawed, and as his own disillusionment grows, he flees. It’s not hard to see the link between a child’s undisputed confidence in their parents to the way cult members view cult leaders, as beacons of purity and perfection.

The relationship between these two men is defined by more than a conflicted paternal bond. Again, this is not a film with one simple answer. Darryl Griffiths brought to my attention the suggestion that the bond between these two men is underpinned by repressed homosexuality, at least on the part of Dodd. This interpretation enriches the film; it certainly sheds new light on the comments of Peggy (Amy Adams) during the ‘handjob’ scene, where she warns him, “you can do whatever you want, as long as I don’t find out.” It also complicates the final meeting between Dodd and Freddie – which is remarkably similar to Daniel Plainview’s final meeting with his son in There Will Be Blood – where Dodd sings “Slow Boat to China” as a kind of farewell.

This is only scratching the surface of a film that demands and rewards deep analysis, a film whose true qualities aren’t truly evident after one watch. One could also consider the significance of the title, whether examining it in the light of Dodd’s final speech about a life without masters, or by trying – à la Who’s the Boss – to consider who the true “master” is. Even the ending is steeped in ambiguity; when Freddie tries to “condition” his young paramour, and Anderson cuts to him embracing the sandgirl, is this a happy ending – with Freddie finally content – or is it merely a return to his animalistic passion?

The Master doesn’t present easy answers to these films, or even the sense that there is any one answer to such questions. After one viewing, I took this as cowardice, a film refusing to commit to a viewpoint. My second viewing revealed those breadcrumbs, thematic morsels scattered throughout, and a truly impressive film. Unlike Animal Farm, there may not be a big solution to The Master; no one epiphany. Thankfully, great art doesn’t have to be predicated on epiphanies. It can be contradictory, complex and demanding; lacking easy answers but rewarding thoughtful questions.

9 thoughts on “Commentary: Mastering Meaning – The Futile Search for Answers in The Master”