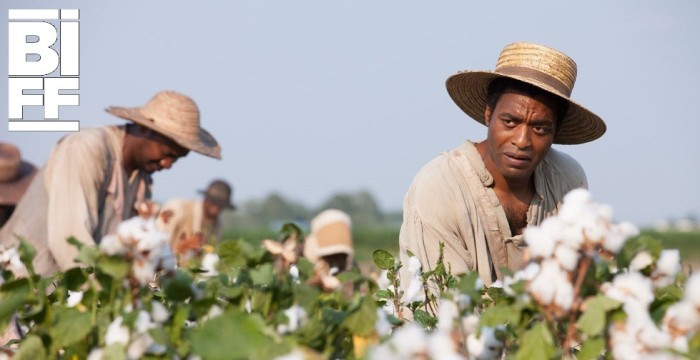 12 Years a Slave takes its name from Solomon Northup’s 1853 memoir, which recounts the true story of how Solomon, a free black man in antebellum (pre-Civil War) America, was kidnapped and sold into bondage in Louisiana. The title tells a casual moviegoer that this is a film about slavery; but it’s the first two words that provide insight into the agenda of Steve McQueen’s tremendous film. These “12 Years” give some relief to the audience, as we know that our protagonist will ultimately escape his ordeal. Equally, it gives each moment of horror and inhumanity within the picture added gravity because we know that Solomon will have to endure such mistreatment for over a decade. The combination of hope and despair, the interplay of light and dark that defines the film is represented by the certainty of those dozen years; there’s a light at the end of the tunnel, but there’s so much more tunnel than light.

The few moments of hope or levity in 12 Years a Slave are consumed by a dark cloud of doubt and mistrust. When Solomon (Chiwetel Ejiofor) watches Native Americans cavort around a fire, playing a makeshift fiddle, the celebration is tempered with painful memories of his own life, when he was free to play a violin for himself and not his masters. During his travels, Solomon – now saddled with the slave name of “Platt” – has reasons to hope: a seemingly benevolent master (Benedict Cumberbatch), a white man who works alongside him and presents an opportunity for freedom (Garret Dillahunt) or a Canadian abolitionist (Brad Pitt). All white men, all with the privilege of freedom to potentially save him from his slavery. Yet every conversation with these men carries an overt, smothering fear that one wrong word could cost Solomon everything.

Such hopeful moments are sparse, and often false, but while 12 Years a Slave is a punishing film, it’s not relentlessly grim. Solomon carries within him a fierce, burning desire for freedom, smouldering coal inexorably compressed into sharp-edged diamond. The real tragedy of 12 Years a Slave isn’t Solomon’s plight; it is the lot of the slaves around him, men and women who have never known freedom and never will. Some slaves embrace their servitude enthusiastically, like Clemens (Chris Chalk), a slave who returns to his master as he would a long-lost father. Others are wretchedly torn asunder by the whims of their masters; the most challenging story the film tells is that of Patsey (Lupita Nyong’o), a fierce individual whose spirit is trampled and crushed beneath Edwin Epps (Michael Fassbender) and his wife (Sarah Paulson). The monstrous reality of slavery means that even Solomon’s eventual rescue is tainted by the realisation that countless people remain as property, less people than things.

Much of the film’s power comes from its screenplay. Admittedly, it would difficult to adapt a story so remarkable without making something moving and meaningful, but the screenplay is admirable for its restraint in not resorting to overt sentimentality or over-explaining its themes. The first act begins with Solomon at his home in Saratoga with his wife and two children. He travels to Washington with a circus in his capacity as a violinist. Upon reaching the capital, he partakes in a “few too many libations” with his circus colleagues and awakens without his “free papers” in a dark cell. Director McQueen allows this section of the story to unfold quickly, without lingering; at this stage his direction is classical and straightforward, moving swiftly from scene to scene. He’s not interested in accumulating dread for the inevitable kidnapping, though he does underlay the proceedings with a deep, malignant violin note as Solomon awakes in captivity.

It’s only when Solomon begins as a slave proper that McQueen begins to assert himself stylistically, demonstrating the craftsmanship and talent that has quickly established him as one of the strongest directors working today. His framing is creative without calling attention to itself, and he regularly uses long, fluid shots to create an absorbing sense of space. Static shots are used to draw attention to symbolism without underlining them: the strings of a violin stretched taut, representing the tense societal bonds that confine the slaves; the paddles of a river boat churning violently, relentlessly through choppy water like the unstoppable, merciless progress of this era’s twisted version of capitalism; or the embers of a burnt letter fading into darkness along with Solomon’s hope of rescue.

McQueen’s confident vision is matched by an impressive cast (almost too impressive – I did find it distracting occasionally recognising the prominent actors even in small roles). Fassbender, who starred in McQueen’s last two feature films (Hunger and Shame), is outstanding as Solomon’s main master, a cruel, petty man renowned as a “nigger breaker,” and is more than deserving of a Best Supporting Actor nomination. Ejiofor is already riding atop a wave of Oscar buzz himself, and it’s easy to see why. He’s required to inhabit a man of great dignity and self-confidence gradually reduced to complete despair, and it’s harrowing how Solomon’s presence erodes throughout the film. Often McQueen will hold camera on Ejiofor’s face for what seems like minutes, wordless scenes requiring him to express a complex range of emotions, and these scenes are among the film’s strongest.

12 Years a Slave is not an easy film to watch, yet it isn’t gratuitous in its presentation of misery or violence. There are scenes of brutal violence and flayed flesh, yes, but the true extent of these characters’ pain is conveyed through powerful, nuanced performances. Unlike many contemporary films, it knows when to eschew dialogue and let its images and actors convey the message. This is a great film, a challenging film, a necessary film. It’s “important,” not just because of its subject matter, not just because it stands a good chance of winning Best Picture, but because it is a meaningful, moving, genuine work of art.

Join 248 other subscribers
My Tweets