““Dark Fantasy” was my long, backhanded apology … It’s always going to be 80 percent, at least, what I want to give, and 20 percent fulfilling a perception.”

My Beautiful Dark Twisted Fantasy, Kanye West’s fifth studio album, felt like the culmination of everything he’d done up until that point. Each previous album had a distinct theme and feel – College Dropout was built on soul samples while Late Registration introduced an orchestral foundation to hip-hop. Graduation whole-heartedly embraced pop-tinged synths while 808s and Heartbreaks went the other direction, avoiding rap altogether for heavily-vocodered, deeply emotional singing.

MBDTF combined all those elements across a sprawling, modern epic, an apogee of eclectic grandeur that was truly exciting and memorable, even allowing for the moments of bloat that slow the album down. If West hadn’t released another record afterwards, it would’ve seemed a fitting conclusion to his musical career (and it isn’t hard to imagine him setting off into another field). Significantly, MBDTF managed to put Kanye’s famous egotism front and centre while consistently undercutting it, revealing the insecurities and frustration that lay beneath his posturing, impossibly arrogant exterior. It simultaneous humanised the man while revealing the immensity of his talent.

So it was interesting to read, in the NYT interview quoted above (necessary reading, by the way), that West saw the album as a compromise of sorts, something he needed to produce as an “apology.” Clearly, Kanye West is not interested in being perceived as human, and, given that context, Yeezus doesn’t just seem like a natural follow-up to My Beautiful Dark Twisted Fantasy – it’s the only thing he could do, an aggressive slap in the face to everyone who thought they could empathise with the man. Yeezus is a door being slammed shut. 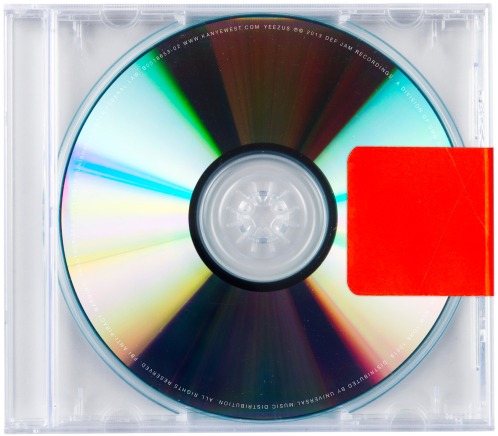 Everything about Yeezus screams departure from MBDTF, whether it’s the outrageously minimalist art design (or lack thereof), the complete lack of singles and the difference in running time – Yeezus is a comparatively lean forty minutes compared to the near-seventy minutes of its predecessor. Musically the shift is just as apparent; Yeezus is stripped-back and percussion-heavy rather than overstuffed and indulgent. Dark Fantasy felt like dozens of ideas in a swirling cauldron; Yeezus feels tight, a complete album with sharp edges and brittle intensity.

Yeezus’s opening barrage is the album at its most abrasive; the first three tracks are co-produced by Daft Punk, but don’t expect mellow disco á la Random Access Memories; “On Sight” is a thudding middle finger, a brag track that exudes sneering distaste for, well, everyone. “Black Skinhead” repurposes Marilyn Manson’s “Beautiful People” into a Saul-Williams-esque roar, part anthem, part rant. “Skinhead” has a fierce forward momentum as West unleashes his thoughts on racism and black celebrities as novelties. The opening lines aren’t the first time he’s referenced Malcolm X (“My leather black jeans on/My by any means on” here, recalling his “I’m like the fly Malcolm X, buy any jeans necessary” from Graduation’s “Good Morning”), but here it’s repurposed, an evocation of Malcolm X’s justified rage against white society rather than a cute joke about consumerism.

Note the feature artist on “I Am A God” – Wikipedia

“I Am A God” is the clearest mission statement from the album, a throbbing dance track where “Yeezus” not only describes himself as a deity, he has a casual chat with Jesus about his “millions” and demands croissants because of course he does. There’s no apology here, no pulled punches, just rampant egotism. It’s also a great fucking track, an unnerving dancefloor nightmare that throbs with dark malevolence. “New Slaves” is West back in rant mode; Pitchfork described the track as “addressing the plight of incarcerated black men” and I suppose it does that, but most of the rage is directed at the shackles of consumerism, best executed by the lines: “You see it’s broke nigga racism/that’s that “Don’t touch anything in the store”/and this rich nigga racism/that’s that “Come in, please buy more.”

The first four tracks – and the majority of the album – are underlaid with thick, hostile drumming that emphasises the dark fury. But if Yeezus is a door slamming shut, then the back half allows it to creep open an inch. “Hold My Liquor” heralds the return of Auto-Tuned singing, and anger is replaced with a druggy melancholy that reminded me of Dark Fantasy’s “Gorgeous.” The first four tracks feel of one piece, but as the album progresses it deviates from the acid house/Death Grips fury to a more resigned anger.

“I’m In It” makes its industrial influences overt; aside from a dancehall/reggae verse from Assassin, it feels like a love letter to Nine Inch Nails, whether it’s the industrial sound, the repeated “starfucker” lyric from Bon Iver’s Justin Vernon or even the title, which seems like a knowing nod at the first Nine Inch Nails single, “Down In It.” Of course, this could all be coincidence, but alongside the Manson samples in “Black Skinhead,” it feels deliberate.

The track also features one of the worst lyrics from the album – “eating Asian pussy, all I need was sweet and sour sauce” – and it’s not the only clunker; writing Yeezus in a fraction of the time of his normal process may have created a feeling of immediacy, but there’s definitely some moments where poorly thought-out lyrics distract from the songs’ impact. Another example: “I wanna fuck you hard on the sink/After that, give you something to drink” from “Bound 2.” All that said, Kanye’s always been primarily exciting for his innovative, exciting production and it’s easy to love his stuff while recognise there are many better rappers around.

While the opening salvo of four songs might be the most attention-grabbing from the album, the clear highlight for me was the (comparatively epic, given the album) six minute “Blood on the Leaves.” The song, which begins with a Nina Simone rendition of Billie Holiday’s anti-lynching anthem “Strange Fruit” and is driven by ominous horns, is both uncannily exciting and suffused with a core of grief; the lyrics seem to be about the disintegration of a relationship but are vague enough to carry multiple interpretations; the prominent sample hints at a deeper meaning. Unique to the album, the song gradually degrades rather than coming to an abrupt end; it feels, in many ways, like a mirror image of Dark Fantasy’s “Runaway.”

The next couple of tracks pale in comparison. “Guilt Trip” and “Sent It Up” are, while decent tracks, not on the same level as the rest of Yeezus. They do serve as a palate cleanser of sorts for the freshness of “Bound 2,” a surprisingly optimistic track that could have easily been a lost B-side from College Dropout, anchored to a catchy soul sample and interspersed with bright “Uh-huh honey”s. It seems to be almost a traditional love song, though there’s naturally a pessimistic streak: “Maybe we could still make it to the church steps/But first, you gon’ remember how to forget.” It’s a surprising way to end the album, but the man does seem to enjoy confounding expectations.

Ultimately, Yeezus is a triumphant victory march for Kanye West. It may not be as memorable or powerful as My Beautiful Dark Twisted Fantasy, but it’s more immediate and many times more coherent as a record. As a huge fan of his earlier album, I would’ve loved to hear a “Dark Fantasy II” but it’s clear that West’s utter discontentment, his refusal to take the well-worn path is key to his longevity.