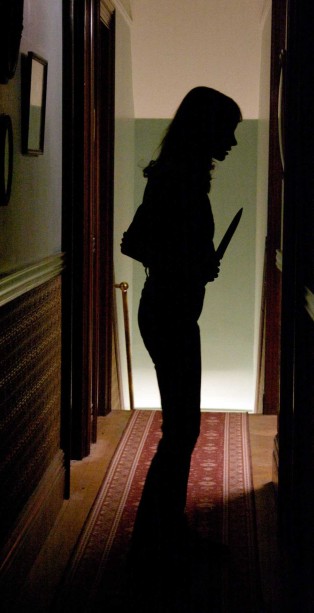 Samantha Hughes watches out the window as the elderly couple who’ve hired her to “babysit” their bedridden relative leave, and while she doesn’t say a word, you can see her trepidation in her expression and body language.

“It’s only four hours,” you can imagine her thinking. “How bad could it be?”

Of course, Samantha doesn’t know that her friend that dropped her off was just murdered. She doesn’t know that the elderly couple are devoted Satanists. She has no idea that she’s in a 1980s-style horror movie, The House of the Devil, directed by Ti West (The Innkeepers). How could she?

But we know all this. So when Samantha tiptoes around the seemingly empty house (the “relative’s” room is actually occupied by mutilated corpses), there’s an unbearable tension, even when she’s doing little more than eating pizza or investigating a closet.

West understands that much of the strength of horror comes from anticipation. Long silences that might be tedious in a drama or comedy instead carry dread when placed in this context. Most horror films don’t have the patience to maximise a suspenseful atmosphere, but The House of the Devil does, ensuring that its bloody finale is particularly gripping.