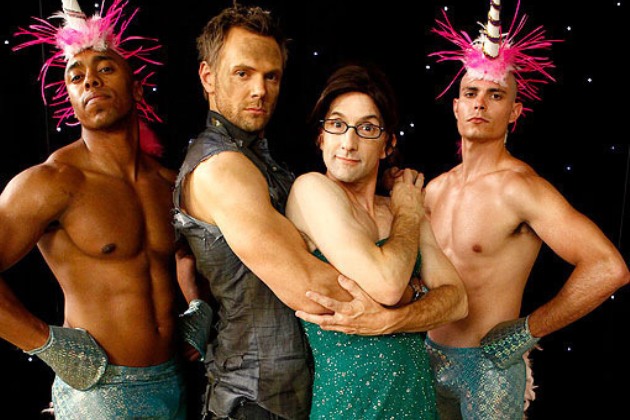 Community’s season four premiere carries the weight of expectation, given it is the show’s first episode without Dan Harmon as showrunner. The new showrunners address this head-on with a broad parody of Community as a laugh-track-heavy, multi-cam sitcom. It’s supposed to be clever, but is instead remarkably clumsy, and it’s telling that it doesn’t seem too different from the brightly-lit “reality” of Greendale.

The premiere isn’t as awful as we’d feared, but neither does it take the opportunity to correct some of the wobbling the show demonstrated in an uneven third season. “History 101” is like a middling Harmon-helmed episode. But generally the weaker Harmon episodes were due to a lack of ambition – here the show is just trying to do too much.

Most of the core narrative just doesn’t work, whether it’s Abed’s anxiety or “new Jeff” in the “Hunger Deans.” There’s still stuff to like here: the best moments are found in the margins, like newly-dating Troy and Britta bickering in the fountain. But on the whole, the show feels burdened by its own history, trying too hard, throwing in poorly-conceived in-jokes (a dalmation here, a “crisis alert” there) to reassure the fanbase that this is still Community.

Leave a Reply to Tim The Film Guy Cancel reply