When I first started watching Justified, it took me a while to enjoy the show. Mostly because Season 1 spent many early episodes on standalone plots, as though it were a gunfight procedural, and I always prefer some serialisation in my television.

Showrunner Graham Yost seems to have found the sweet spot between standalone and serialisation by now, best demonstrated by this episode’s Raylan plot. We’re still following the narrative thread of the cocaine parachutist with no idea where it might lead (serialisation!) but we get to enjoy a fantastic, essentially standalone scene like the encounter between the crooked FBI agent and Raylan, a slow boil of a scene as each man comes to realise the gravity of what’s happening (My only complaint is the writing to get them there was a touch clumsy, but it’s easily forgiven). 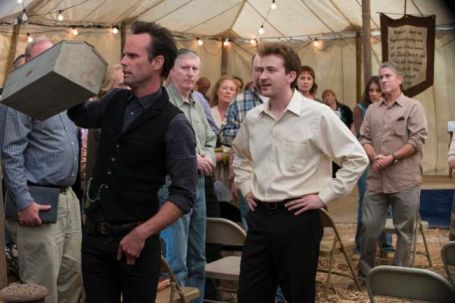 Neither Raylan’s girlfriend’s (ex?)-husband plot nor Johnny’s potential betrayal grabbed my attention, but the preacher plot got more interesting, with Boyd suffering a serious, rattlesnake-related setback but a significant win at the same time, thanks to his preternatural ability to read people with stone-cold accuracy. Plus, he got this incredible line:

“Dark angels, sent to remind you that all men are humans.”

Join 248 other followers
My Tweets