Spartacus is a series that’s always made good use of Australian and New Zealand actors and in the second, middling quality episode of Season 3 it introduces a couple new Australasians to the fold. 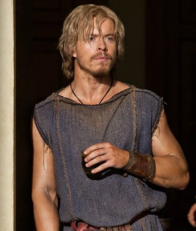 The first addition is Anna Hutchison (Underbelly, Cabin in the Woods) who plays Laeta, introduced to show the human toll of Spartacus’ war (and probably cosy up to Spartacus in future episodes sans top, naturally). Her introduction lay amidst a plot where the slave army conquers a coastal city, which managed to make a big story small-scale effectively by focusing on Spartacus, Gannicus and Crixus. It wasn’t particularly exciting, but I was impressed to see Spartacus show some steel at the end of the episode – at times, McIntyre’s Spartacus has seemed soft compared to Whitfield’s; not tonight.

The second is Todd Lasance (Crownies), playing a Julius Caesar of questionable historical veracity. Lasance plays Caesar as a brash, cocksure (emphasis on “cock”) wild man, channelling the charisma of Chris Hemsworth’s Thor. It’s good to have another clearly-sketched opponent for Spartacus to face, even if Caesar was largely adrift in a subplot that served to do little but establish the motivations of those in Crassus’ inner circle.