Game of Thrones has always had sex as a major selling point, and it hasn’t always been particularly thoughtful about its use of sex and nudity. Of course, this isn’t necessarily a problem! As a fan of Spartacus, I’m not averse to a little fan service, and while using some boobs to jazz up necessary audience information – “sexposition” – can feel a little cheap, it’s not a well the show goes to that often. But some issues remain, whether it’s a distinct lack of male nudity or an over-representation of female extras as prostitutes.

I was therefore appreciative when “Second Sons,” an episode that revolved as heavily around sex as any soap opera, took a more considered approach to the subject. The episode had its fair share of nudity, but I think its three nude scenes – unlike last week’s superfluous scene with Theon – were demonstrative of the reflection given by the writers to the gender roles in the Westeros. 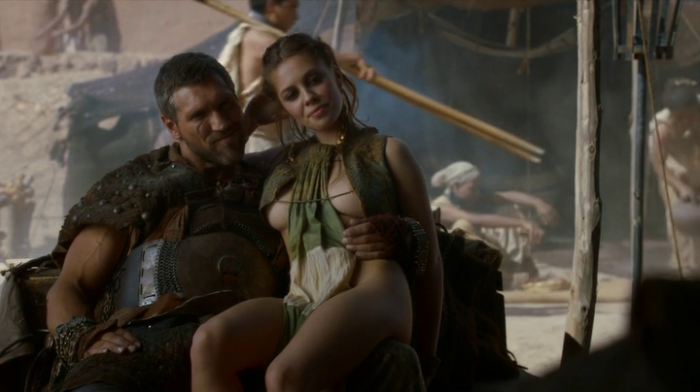 The first (mostly-suggested) nudity was little different out of context to any of the fan service scene so far, as a barely-clad whore follows the orders of a trio of gruff mercenaries. The mercenaries have been hired by the slave traders of Yunkai to repel Daenerys’s formidable army, and have just returned from a parley where Daenerys tried to convince them to join her cause, but, inevitably, the conversation revolved around what the mercenaries would do to her after they defeated her army.

It’s not a new problem for Daenerys. She’s one of the most powerful characters on the show, both in personality and military strength, but throughout the show she’s invariably treated as a sex object by those encountering her for the first time. Jorah Mormont’s devotion to her is tempered with deep respect, but it’s largely motivated by love. It didn’t take her long in Qarth before she was met with both propositions and proposals from the Thirteen.

Even her introduction to the show was defined by sex – we first meet Daenerys as she is unclothed by her brother before bathing, and her rise to power begins with her seduction of Khal Drogo. Tonight provided a thrilling inversion of that introduction. It was perhaps inevitable that Daenerys would indeed win over the mercenaries. Or one of them, at least (the handsome one), who arrived at her bath with the heads of his former allies. When Daenerys Stormborn, the Last Dragon, strode confidently out of the bath, her nudity armour rather than vulnerability, her transformation from that timid girl we met in the pilot could not have been clearer.

At King’s Landing, the topic of sex was on the forefront of everyone’s minds at the wedding of Tyrion and Sansa, an event that managed to live up to all the awkward comedy suggested in last week’s unseen conversation between the two. Sex carries with it a great deal of import in a world where bloodlines are so highly valued – just ask Robb Stark and his new wife – and the episode got a lot of mileage by tearing Tyrion between the demands of his House, his feelings for Shae and his understandable reluctance to bed an unwilling teenager.

Amidst the (hugely entertaining) swirl of events at the wedding, a small moment demonstrated the depths of Joffrey’s abhorrence, as he idly threatened his ex-fiancé with rape, his trademark smirk never shifting from his face. This is a boy whose interest in sex seems to be non-existent – but his threat wasn’t about sex, but a cruel demonstration of power.

The events at Dragonstone were less interesting than those of King’s Landing, but served as a home for the episode’s third nude scene as Melisandre disrobed in service of her seduction of Gendry. This scene was interesting; I don’t think it’s insignificant that one of the most powerful women in this show is comfortable using her sexuality in order of her (and Stannis’s) goals. Incidentally, the show seemed to go out of its way to not take Zoller Seitz’s advice when it came to adding some sausage to the mix.

Game of Thrones isn’t a show about “themes” – showunner David Benioff has been quoted as saying “Themes are for eighth-grade book reports.” But there is a lot of thought behind the dynamics of the characters and the world, and this episode provided some thoughtful reflection on how gender roles and sex had their place in the power dynamics of Westeros – whether it was intentional or not.